The Bundesliga: 10 Young Players to Watch

Germany has come to lead the world in the development of young footballers. Formerly known for producing dour and effective, moustachioed men who played efficient football and looked imposing in shellsuits, it's now a land of slide-rule midfield technicians, twinkle-toed trequartisti, jet-heeled wing backs and stealthy false nines. All of them looking young enough to appear in a milk advert. Men like Mario Goetze and Mesut Ozil are now in their prime, younger generations marching on to succeed them.

To celebrate the kickoff of the new Bundesliga season this weekend, we profile ten players born in 1995 or later who we expect to make an impact this year. Be in no doubt - there are twice as many that we had to leave out. 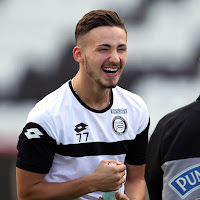 Fiery striker who has finally established himself as a presence in the Schalke matchday squad. It proved a longer road than most expected back in 2014, when the Gelsenkirchen club put a EUR40m+ release clause in the then 17-year-old's contract.

After a successful 2015-16 loan spell with Sturm Graz in Austria, Avdijaj returned to the Veltins-Arena to eventually force his way into contention, making his long-awaited first team debut in December 2016. He finished last 2016-17 season with two league goals from 12 appearances.

German-born, he has elected to play internationally for Kosovo, his parents' country, with two caps to his name so far. Regular international football may help him advance his club game. Not yet quite at the same level as some on this list, he still has the potential to be the next youth success at a club with a proud development record.


The most expensive Scottish footballer ever had a slightly disappointing 2016-17, after a EUR13m move from Nottingham Forest in England's second flight. Having taken the bold opportunity of a move from his boyhood club (born in Scotland, he grew up in Leicestershire), he struggled to hold down a place in the first team and did not earn stellar reviews, even as the club tore up the history books to finish second. Summer rumours have him linked with a return to England and the Premier League, so one reason to watch him will be to see if he, and Leipzig, continue with their experiment or choose to call the whole thing off.

Even his fans would concede that Burke is not quite the finished article; his touch sometimes a little heavy, his passing sometimes misplaced. But he is quick and keen, direct and relentless, with an eye for the main chance be it a through-ball or an attempt on goal himself. And remember, he was never a regular starter even at Forest, so let's not expect too much too soon.

We hope Leipzig choose to persist with him. And with a Champions' League campaign placing new demands on their squad, perhaps they yet will.


A major part of the recent Moenchengladbach revival. Syrian-born Dahoud is now a veteran of two Champions' League campaigns and two full 1.Bundesliga seasons, but without yet getting his hands on a full Germany cap. He has, however, secured the other thing that emerging talents at second-tier clubs covet most: a move to one of his country's mega-clubs. 2017-18 will be a test of his maturity and his authority as a player, as he looks to establish himself in a potent squad already well stocked with talent in midfield.

Energetic and with a quick-stepping style, Dahoud roams all areas of the midfield, but prefers to be playmaker rather than enforcer. He has the skills required, especially those quick feet and a good eye for a pass; we expect him to settle into an advance-playmaker role. Even so, he may need to add more discipline to his game and take fewer risks, if he is to convince Bundestrainer Loew that he has a serious role to play for Germany.

Like Jonathan Tah (below), another young international associated with the recent form of Leverkusen and their system. A pacy and aggressive full-back who can play on either side of the field, he has earned rave reviews for his energy levels and attacking contributions. Henrichs at his best embodies everything that's required from a wide defender in the modern pressing game; if Leverkusen recover their form in 2017-18 then he is likely to be a key part of it. If not, he has probably done enough to win a move elsewhere.


Very tall and very, very young, 2016's Swedish sensation has acceleration and touch that belie his lanky physique, and composure that belies his tender years. Isak can play up front or on the wing,  but 10 goals in 24 games reveal his true strength; his final ball from out wide can be wayward, but in front of goal this baby-faced giant has the nerveless sangfroid of the ghost-face killer.  It will be interesting to see how soon he breaks through into the Dortmund first team, given the club's fearsome array of attacking talent. But their model depends on maintaining a conveyor belt of young talent, and they have spent EUR9m to put Isak on that conveyor. So Isak will get his chance in the end.


We could have filled this entire list with Dortmund players, and we had to work quite hard not to, excluding Christian Pulisic because he's probably too much of the finished article, and Emre Mor because he seems to be bound for the exit.

Felix Passlack, on the other hand, has had a gentle introduction to life in the Bundesliga so far, with only eight starts under his belt. The former Germany U-17 captain is looking for a breakthrough year. Hugely energetic, quick and technically sound, he has scored goals whenever he's had the chance (including one in the Champions' League) but can play all over the park. This versatility will increase his first team opportunities, especially as a substitute, and improve his all round game; but he'll need to specialise over time since, even forty years after Total Football, mastery of one position is still the way to become a regular starter.

Ultimately Passlack is expected to find his way to a full-back role, where his many defensive qualities - including bite in the tackle and good reading of the game - will be to the fore. He had the confidence of former head coach Thomas Tuchel, and one key question will be where he fits in the plans of the new man in charge, former Ajax coach Peter Bosz.


A year after his mega-money move from Benfica, a year after he became a Euro 2016 winner with Portugal, it's hard to believe this boy is still a teenager. He is in fact the youngest man ever to win the European Championship. Having moved onto an altogether bigger stage than the Estadio da Luz, he predictably didn't get a starring role in the 2016-17 Bayern side, so the coming season is about progress and maturity. To make his game complete, he needs to add discipline and consistent accuracy to his athleticism, skill and vision. As a modern central midfielder, it wouldn't hurt to see him put his considerable strength - although only 176cm tall, he's a solid unit - to work a bit more in the tackle. Bayern can afford to be patient, so the question for the coming season is how much opportunity he gets to step in among Vidal, James Rodriguez, Ribery et al - and how well he takes it.


A bit of a punt, this one, but Seydel has already announced himself to the Bundesliga, in some style, as a strong and predatory forward. He marked his league debut last term by scoring with a composed finish against Hertha BSC. Capped up to U-19 level by Germany but never a prolific collector of caps, with only 187 Bundesliga minutes under his belt Seydel has work to do to establish himself. That's especially so by comparison with some of those elsewhere in the list.

However, he may prosper by being in a squad with fewer options. Mainz are not abundantly equipped with potent forwards, and there is an opportunity there for this product of their youth team to take.


Powerful defender who is seen as a long term contender for leadership of the Nationalmannschaft, though he's only three caps to his name so far. Made a stellar impression in 2015-16 as Leverkusen qualified for the Champions' League, culminating in a trip to Euro 2016 as a non-playing squad member. Performed well in the group stages of European competition in 2016-17, but overall it was a season of limited progress as Leverkusen's league form suffered badly.

A physically dominant defender, Tah reads play well and is comfortable on the ball, though perhaps could do more to master the art of distribution. Some will be surprised to still see him at Leverkusen, and a good season this time around would probably seal a career-defining move.


Holding down a first-team place for the best part of a season at one of Germany's perennial Champions' League participants arguably means you've gone beyond being a kid to watch. This, however, could be the season that Julian Weigl truly stamps his authority on the Bundesliga and establishes himself as the future of the Germany midfield. Possessing a rounded skill set for a modern central midfielder - composure, vision, a good passing range and great balance - he is one of those players who always looks like he has time. He could perhaps improve the physical side of his game, and may become less lightweight with age; he is, in any event, no slouch in the tackle. Weigl's greatest challenge may be the sheer quality and quantity of competition he faces at club and international level - from Borussia club-mates Marco Reus and Mario Goetze, and from Toni Kroos for example - as he tries to move to the next level.

Posted by Football Hipster at 06:25